So those who know me know that I'm a bit of a last minute late kind of girl. I was born 10 days late and I know somewhere out there there's a scientific study correlating being born late with running late as an adult.

If not, here's a really good article I love that is absolutely spot on about what goes on in the heads of late people.

Those who know me, also know that I'm a yeah-we-can-totally-cram-in-10-things-in-2-hours kind of girl. Why not? I say! I was once in Milan for two hours between connecting trains and managed to catch up with a friend, seek out some delicious gelati, take the metro and visit 8 sites - all with 1 piece of cabin luggage and 4 other bags in hand. When we travel, John is continually surprised at how many things I can pack in at the last minute. He would normally prefer to arrive somewhere early. Me? I'm too greedy. I feel it's a waste of time to arrive early. Why not arrive just on time but be able to do something else in that extra time you've gained..!

Anyway, today I tried to catch the second to last day of Paris Ramen Week Zuzutto (don't ask me why I didn't drop by on the previous 4 days). Paris Ramen Week is a week whereby famous Japanese chefs fly over to Paris and showcase their versions of the iconic Japanese ramen dish according to their region and interpretation.

Friday was Kazuyuki Takei's day, a chef who has been perfecting his ramen for almost 40 years.

I lined up at lunch time early to grab a place for my girlfriend and I, but was disappointingly told there were no more places for the lunchtime session, at 12pm.

I came back on my own at 4:30pm thinking I would be early for the dinner session. I had hyped myself up to be able to dine alone without feeling awkward. I was 31 after all, right?

I was then told that the current waiting time was 1+ hour. 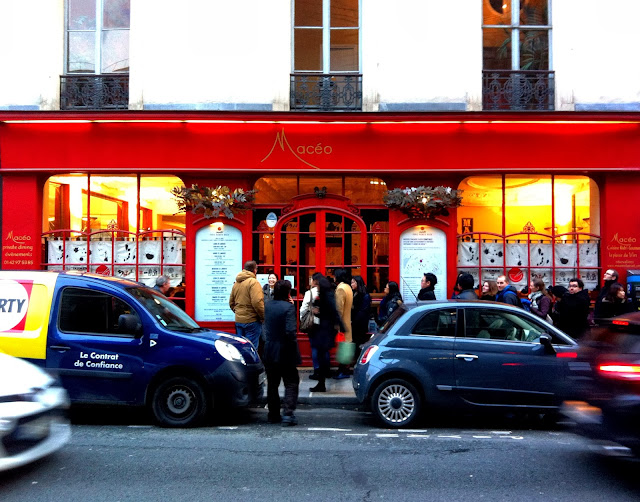 Then continued across the road: 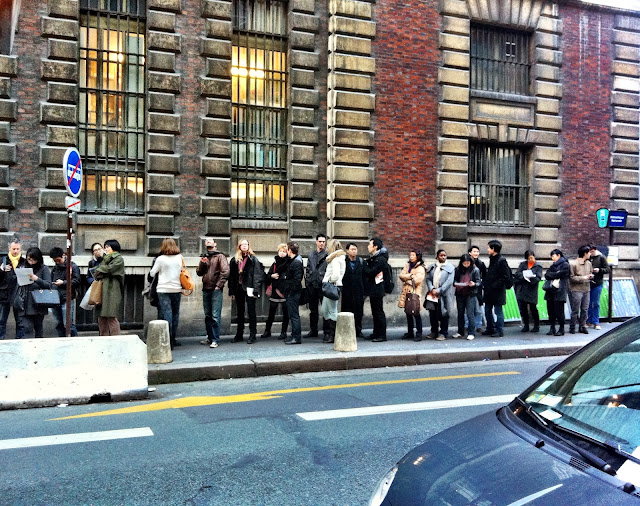 The last minute late-girl in me hung her head in shame as I really should have started lining up at 4pm, instead of 4:30pm seeing as I had to leave at 5:30pm to catch the metro.

The but-what-if-girl in me decided that I would try my luck anyway, I had one hour after all! So I waited and waited and waited. The minutes passed and I was dreading that Murphy's Law moment where I would have to leave the line just as I was ready to order. 45 minutes of waiting (in the cold again) later, I made it through the doors! Only to be told that there would be another 15 minutes before my food would come out. I explained how I had lined up for lunch and was turned away, then had lined up again for the second time today and wondered if there was any chance I might be able to eat earlier seeing as I only had 15 minutes left..please..thank you..please.

The Japanese front of house man was so lovely. When I started to admit defeat and contemplated leaving, the man ushered me over to a table and there I was seated at 5:20pm.

3 minutes later my steaming hot bowl of ramen was brought out.

I had exactly 7 minutes to photograph, inhale/thoughtfully savour my delicious bowl of ramen.

5 minutes later I had finished my bowl.

Best bowl of ramen I had ever eaten in my life, definitely worth the 10 euro and 58 minutes I tried my luck on!

Email ThisBlogThis!Share to TwitterShare to FacebookShare to Pinterest
Labels: food, Paris, what's on