Bright and early this morning, in the harsh 4 degree Parisian Winter weather, I headed off to the Salon Saveurs des Plaisirs Gourmands. By the way before I continue, how 'French' does the name of this salon sound? Look at all those words used - tastes, pleasures, gourmand. There are no simple words like 'food' or 'festival' or 'eat' or 'foodie' in the title, instead the words have to be a little alluring, a little seductive, a little sensual .. bah, a little 'French'.

Anyway, back to the event itself! Local and regional specialised produce, new innovations and endless reinventions of classics, it was a French food festival worth every minute (and sample!).

Like the Europain convention I attended earlier this year which focused on showcasing the best the industry has to offer in terms of bread, desserts, pastries, chocolate, icecream etc, this salon was also feast for all the senses.

Sparkling delicate bubbles of champagne chased each other around in their flutes as tastings were served at 11am when we arrived (it's never too early for champagne!). Fragrant truffle spread, truffle oil and truffle paste lined up in little pots ready to be savoured and steaming hot French fondue samples were handed out to every passer by. There was even a French Caribbean stand specialising in delicious varieties of infused rum - from wedges of juicy sweet mango and bright red pomegranate seeds to little fiery whole chillis and chunks of intense ginger.

Here are 21 interesting things I came across at the salon.

1. A 400€ truffle on display and its plethora of truffle inspired products - where do I start...?? 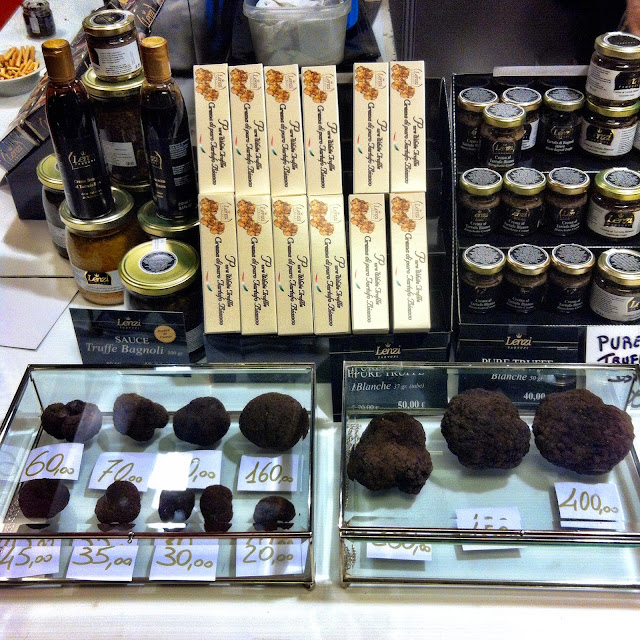 2. One of France's most famous and delicious butters - BORDIER
I never grew up with butter nor ate it in Australia but there's something about French butter that has made me convert, I think it must be those irresistible flecks of sea salt. 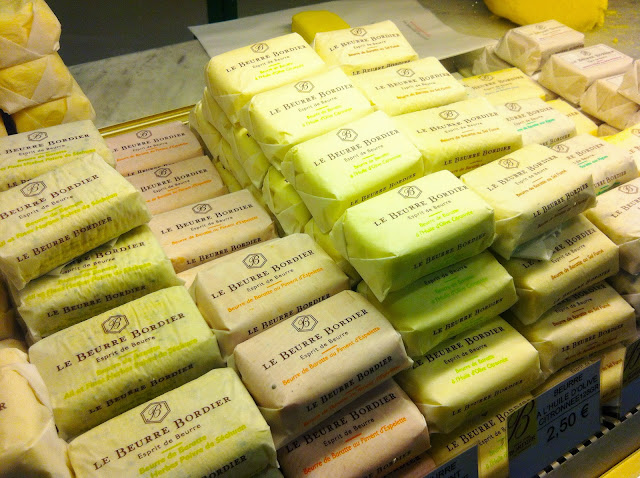 Not to mention lavender and rosemary cheese. And my favourite, pesto and garlic cheese with a robust hit of garlic, just the way I like it, early in the morning haha.
Not too sure about that play-doh like colouring though. 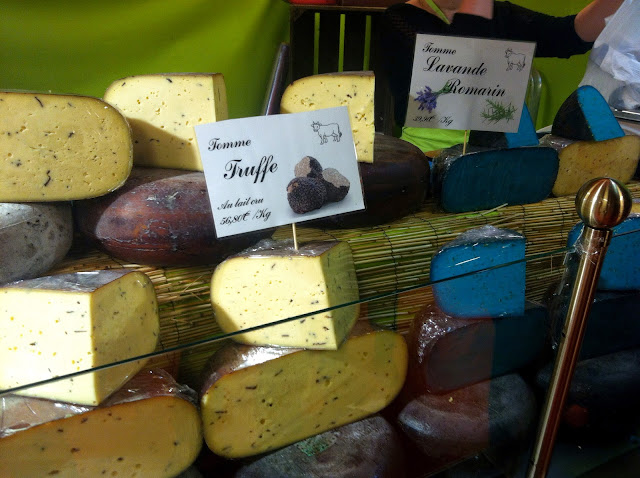 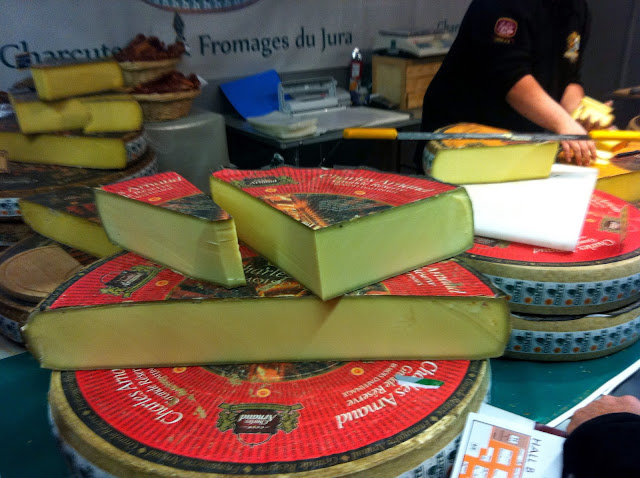 5. And, more cheese again - this was the strong green mouldy punchy Roquefort stuff that I used to be scared of but now go in with a vengeance. 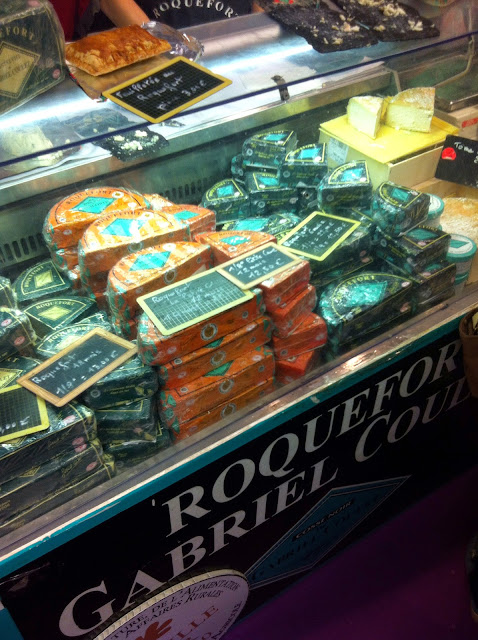 6. Okay, last cheese shot - this was a prepackaged combination of Vaccherin and Gruyère cheese, perfect for those cold winters. The combination of two cheeses made a great fondue base, not too runny, not too chewy. 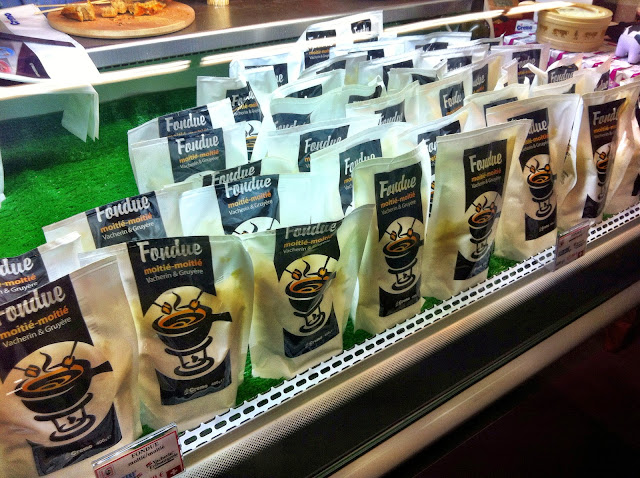 This wasn't a very 'French' stand but I loved it all the same, I mean what's a food salon without some Italian food! Plus I love a pickled garlic clove with a wedge of juicy sun-dried tomato any day (even in the morning) 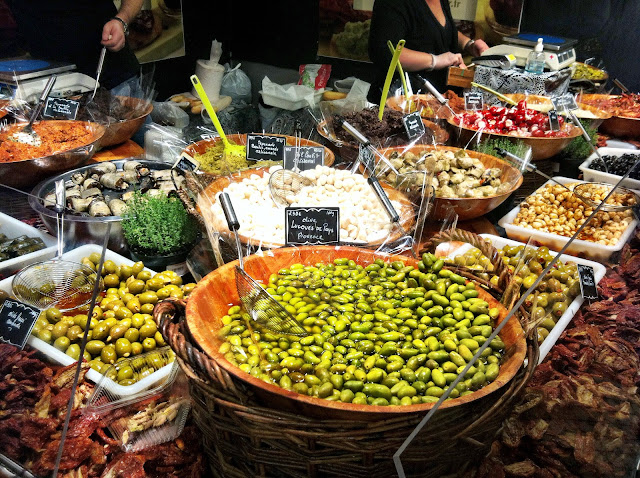 Frenchie loves this 'cake', I don't really know why.. It's nice and all. We've had it at home many times but I think I'm too paranoid about the black (potentially carcinogenic) crust to properly appreciate it. Plus its name sounds like a crab, or a turtle or a tortoise or something.
Basically it is a 'cheesy little pie' - discovered accidentally, the black crust protects the inside during the baking process to deliver a soft, fluffy, not too sweet interior. Maybe I'll like it more if I remove the black crust next time..? 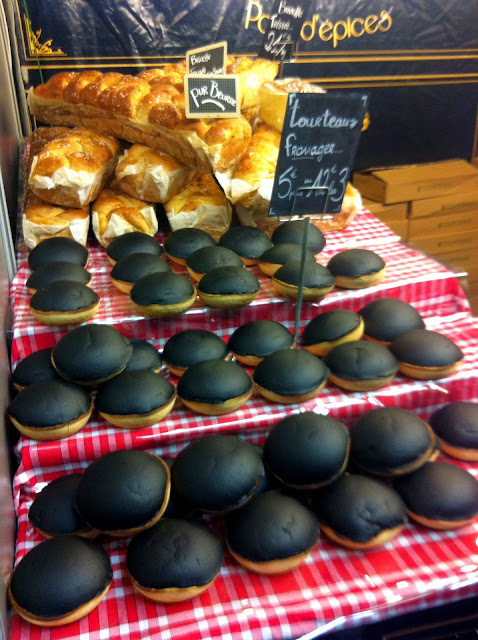 9. What's a French food salon without a million stalls showcasing their finest charcuterie..? 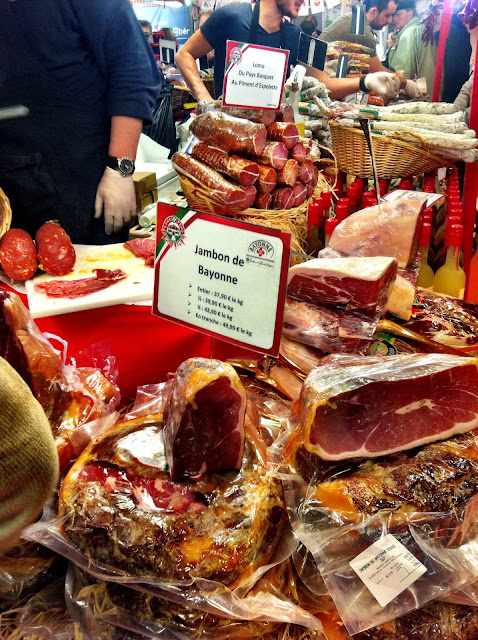 10. And saucissons? Duck? Fig flavour? Hazelnut? This is only a small selection of what was available. 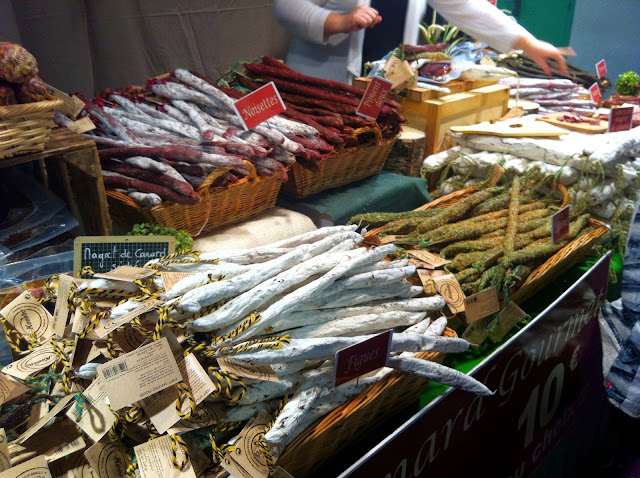 11. I had to take this picture because it's so stereo-typically French

I have to say I hardly see French people order this in restaurants but I'm sure they must. Either that or they buy these pre-prepared buttered-up ones and eat them at home! Frenchie doesn't eat snails. He doesn't eat frog's legs either.
Seeing as I've tried both before, I consider myself to be slightly more French than him. 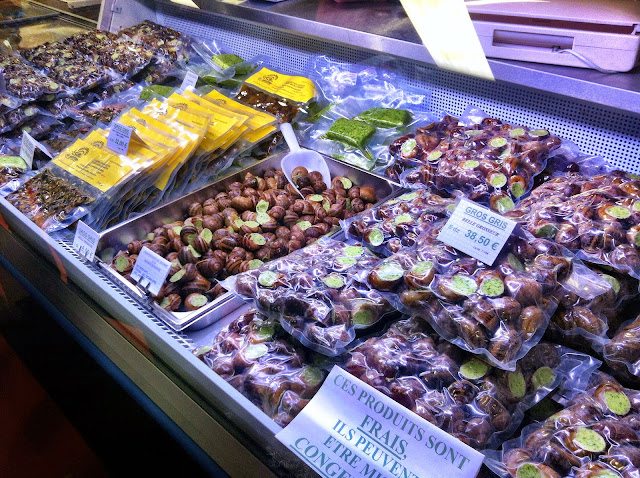 12. And of course, the controversial foie gras..! 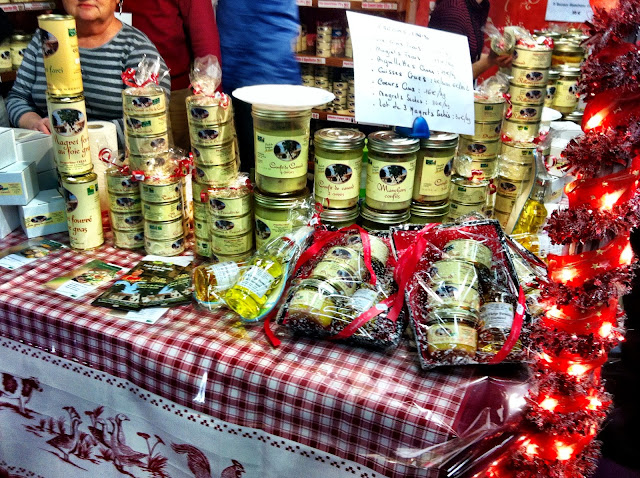 13. These grow-your-own-oyster-mushroom (pleurotes) boxes were a little intriguing, a little freaky.
Priced from 19.99€, they come in several different coloured varieties. Apparently you just water it and keep the box inside and it will grow.
I stared at them for ages, hoping Nemo would appear sooner or later. 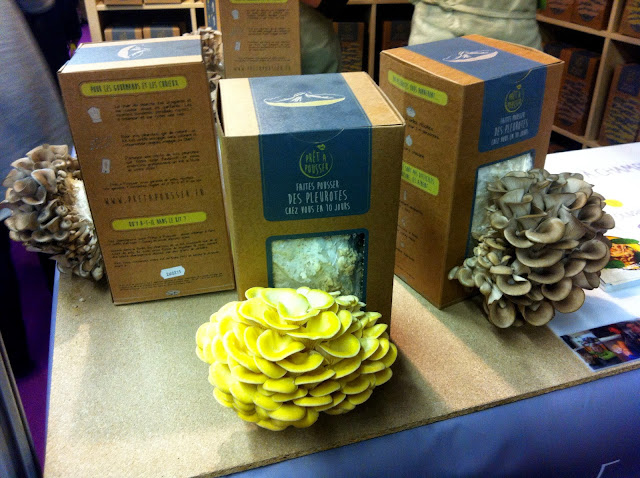 14. Onto something a little sweeter
I found these delicately fresh floral and herbal wines. Served chilled, my favourite was definitely the Thyme Wine - refreshingly light, the subtle taste of thyme hits your palate after a microsecond delay. 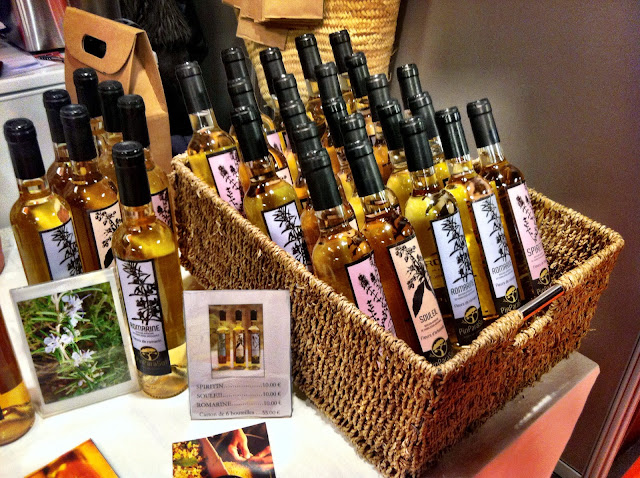 15. Probably my subconscious' favourite stand
All vegetarian-vegan selection of savoury and sweet products. They even had Sapori seasoning on special! I started doing Meat Free Mondays when I was living in Australia years ago and have since then taken on the part time vegetarian/part time vegan approach which suits me well as I figure I get the best of both worlds. 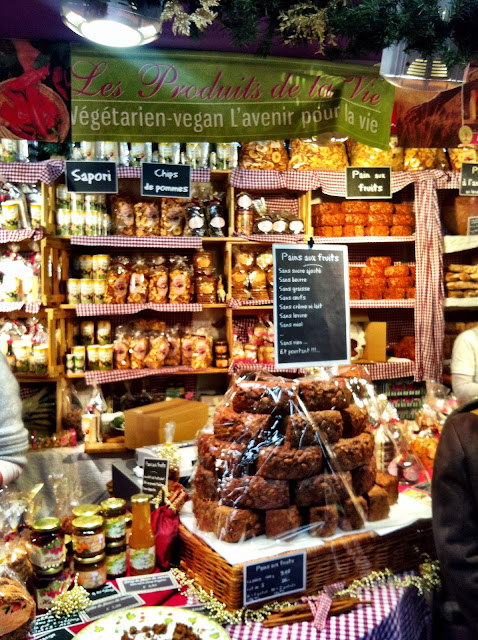 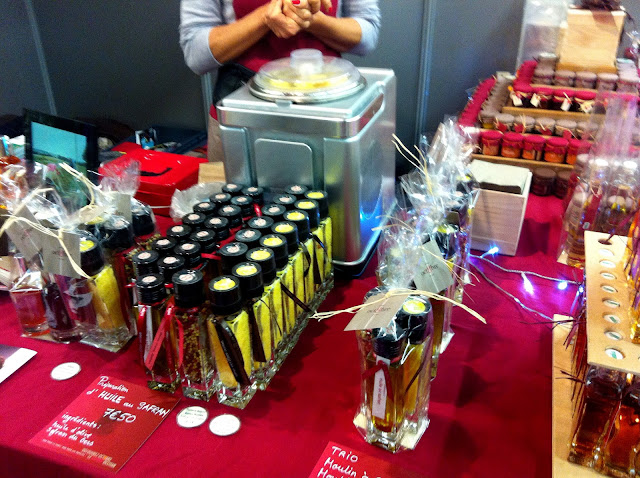 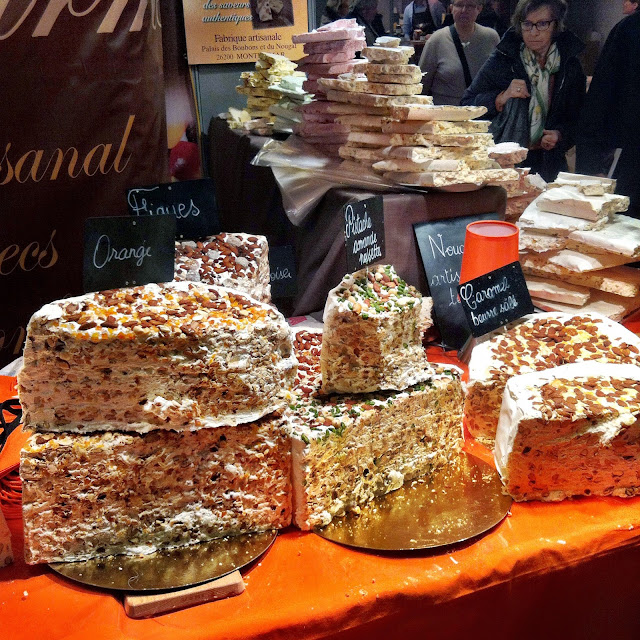 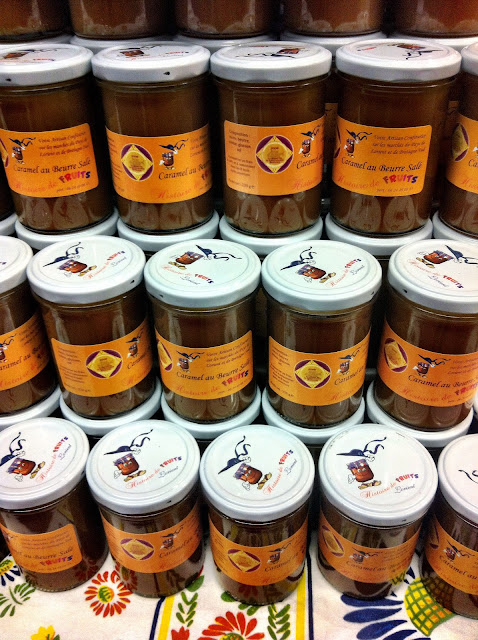 19. Ooh ooh, these were toffee type things covered in lavender white chocolate. They were beautiful! 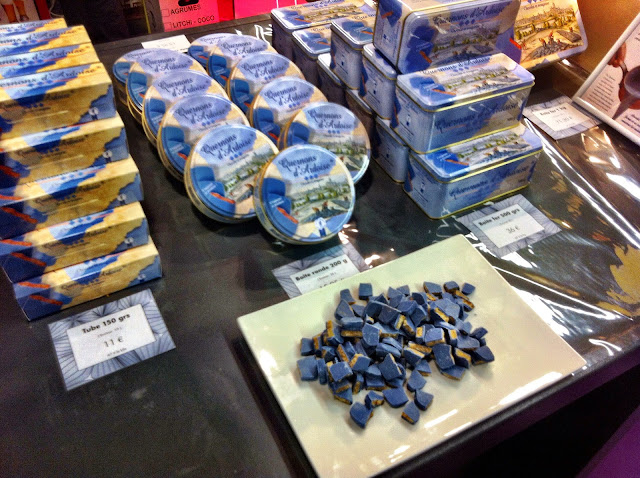 20. The Maison de la Chantilly stand
An entire stand, an entire shop actually in Paris dedicated to chantilly cream. This was where I originally found tickets to the Salon Saveurs des Plaisirs Gourmands, so I must thank them for their invitation! 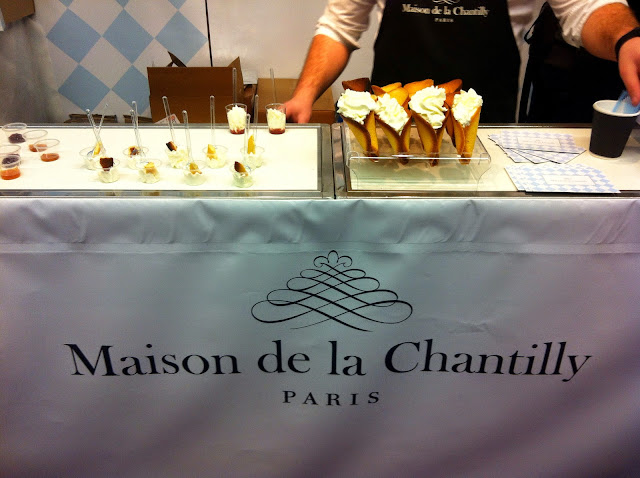 My friend and I referred to this as 'French mountain food'. Made from melted cheese blended with potatoes and garlic, this was so much fun to play with! Probably better with an actual dish than on its own for me as the taste and texture was a little stodgy (like how mountain food should be I suppose!). Thank you to Parisdise Photography for these shots! 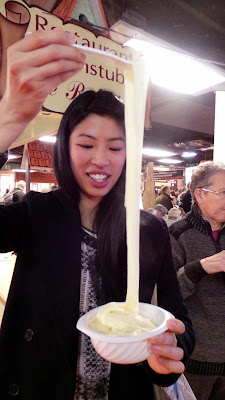 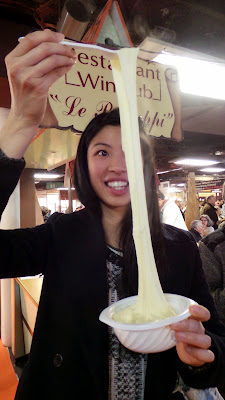