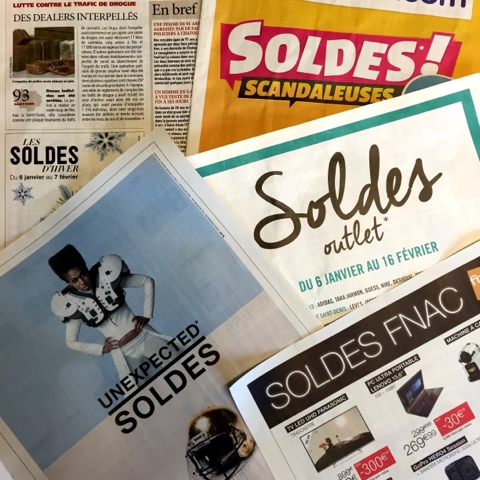 THE WINTER SALES ie "les soldes" will officially begin at 8am, Wednesday 6th January. So brace yourself for exactly 6 weeks of markdowns and price slashes throughout the month and up until Tuesday the 16th February 2016.

Major "soldes" are big thing in France because French laws tightly regulate when stores can and cannot heavily reduce their prices. I'm assuming it was put in place to protect businesses so that the big stores couldn't drive out the smaller ones with their power to discount whenever they wanted, all year round. This way, all stores are treated the same at least regarding the time frame they are allowed to be on sale, regardless of their capacity to slash their prices.

According to French law, the Winter sales in January/February and the Summer sales in June/July are the only two periods stores are legally able to "go on sale" to clear stock, selling below cost price. Other special guidelines set out by the French commercial code include: stock must have been in store for at least a month before they go on sale (to avoid bringing in cheap stock to sell during the sales), sale and non-sale stock must be clearly marked and separated (to prevent misleading advertising) and, the original price must be visible to consumers.

One thing for sure is that we can expect more competition between retailers during les soldes this Winter as they try and clear their stock after the sales slump that followed the November 13th Paris terrorist attacks.

Department stores, stand alone stores, shopping centres, boutiques, outlets, e-commerce websites, everything you can think of across France will be on sale.

Here are some things to think about when gearing up for the sales:


* If it is an investment piece you've been eyeing, grab it early while there is stock left, and in your size

* If it is a day to day item that doesn't require sizing, hold off and wait until later, there will be further reductions after a few weeks

* Know your European sizing, there are going to be crowds everywhere and sales assistants won't necessarily have the time to help you convert your sizing

* French sizing and French children sizing in particular tend to be smaller than US/Australian sizing, keep that in mind when shopping for the little ones as they will grow out of your purchase even faster than usual!

* Choose your day and time appropriately, on the weekends will be ridiculous as everyone from the suburbs will venture into Paris, in the afternoons the stock might be all over the place - try during the week in the morning if possible when it is quieter, when stock has been replenished and neatly sorted to protect your sanity

* Double check the return/exchange/credit policy before leaving the store, make sure it is in writing somewhere as sale items aren't necessarily treated in the same way as non-sale items, sometimes exchanges and refunds are only allowed after a certain sale period

* Claim your VAT (if this is applicable) - the saving is usually 12-15% but can be higher depending on the item. The minimum spend is normally 175€. Produce your passport, ask for the appropriate paperwork and arrive at the airport 1 hour early with the item you have purchased to finalise the refund

* If you are purchasing higher priced items, check if stores offer any further discounts - I know at BHV Marais, I was given a 10% discount on the spot just for flashing my Australian passport, no VAT forms nor waiting period required!

* It sounds obvious but make sure you bring snacks, dress lightly and know where the short lines will be for the toilets (eg men's department toilet lines are always shorter than in the women's department) and, also which toilets are free and which aren't (I'm talking to you Printemps 1.50€/toilet visit vs Galeries Lafayette 0.00€/toilet visit!)

* Charge your smartphone and pop that portable charger in your handbag, you'll need something to do while waiting in those lines ;)

* Enjoy yourself and happy bargain hunting..!

Email ThisBlogThis!Share to TwitterShare to FacebookShare to Pinterest
Labels: Paris, practical information, shopping, things to do