Kicking off a new series of blog posts about weekend getaways from Paris is one about our recent trip to the snow! Here's the essential information:

DISTANCES AND TRAVEL TIMES :
Paris - Annecy (559km, about 5-6 hours depending on traffic)
Annecy to Centre Nordique d'Agy (75km, about 1 hour) 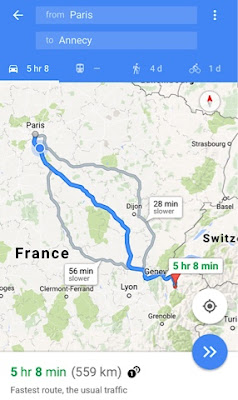 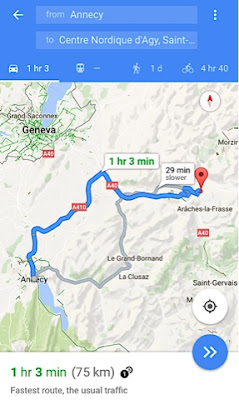 So apart from teaching at two universities and various businesses in Paris, I also sometimes give English lessons over the phone. It's a great concept as it allows Frenchies to squeeze in a half hour conversation in English here and there, before they start work, after they finish work or even during their lunch break..! The French are a studious lot I've discovered. I even had to recently reschedule a lesson at one of the universities I teach at La Sorbonne, to a Saturday morning time slot. To my surprise, the students didn't complain at all...?! This would be unheard of in Australia but apparently French high school students are used to having classes on Saturday mornings (sometimes starting at 8am...!?).

Anyway, back to the French Alps.

So one day a student of mine who lives in the French Alps invited Frenchie and I to spend a weekend there at her place! I was so moved by the invitation. My student and I had gotten to know each other very well over the phone and we got along very well but still, I didn't expect this level of hospitality! I was so excited..!

So Frenchie and I both took a Friday afternoon off work, filled up our petrol tank and set off for our weekend away (with people we'd never actually met in person!) from Paris. On the A6 highway, well actually on every highway we take on our road trips, I came across this sign. And I had to take a photo. I'm always so gobsmacked at the sight of these signs in France, no matter how many times I see them.

You see, Australia is ridiculously big. You can literally put the whole of Europe into Australia (thank you blog.australian-native.com.au) and you would still have extra bits left over..!

You can drive for hours in Australia and still be in the same state.

So it's no surprise that my head constantly struggles to grasp this concept of you know, just driving yourself to Milan, or Geneva. We aren't just driving ourselves to another city here, it's a whole different country! Italy. Switzerland. How does one simply DRIVE oneself to another country..? Just like that?

From Oz, we have to fly to different countries. Half the time we have to stop and refuel the plane. We have to stop in a second country, to get to the original country because the plane runs out of petrol.

So anyway, we arrive in Annecy on Friday night. I'd been nervously anticipating the whole blind date meeting. Like I said, we'd never seen each others' faces before, only our voices so the whole meeting was a little surreal. I thought about bringing a rose to hold so we could recognise each other ;)

My student ran out and hugged me. I was expecting the French kiss kiss greeting - but was bowled over with a hug like old friends who hadn't seen each other for so long! Before we knew it, we were at the table digging into a classic "Haute-Savoie" (the name of the mountainous region of the Alps) meal that had been prepared for us by her and her husband.

"Raclette" - oozing raclette cheese that gets grilled on the spot, melting and sizzling, cracking and becoming crispy and crunchy at the edges. Layers upon layers of raclette are literally poured over our potatoes and eaten with the regional charcuterie and some "cornichons" (pickles) to balance out the richness. All washed down with a glass of special white wine from the region, "le chignin".

The next morning we woke up in a Winter wonderland. There was snow everywhere outside the windows. I was pinching myself. Where had I woken up?! 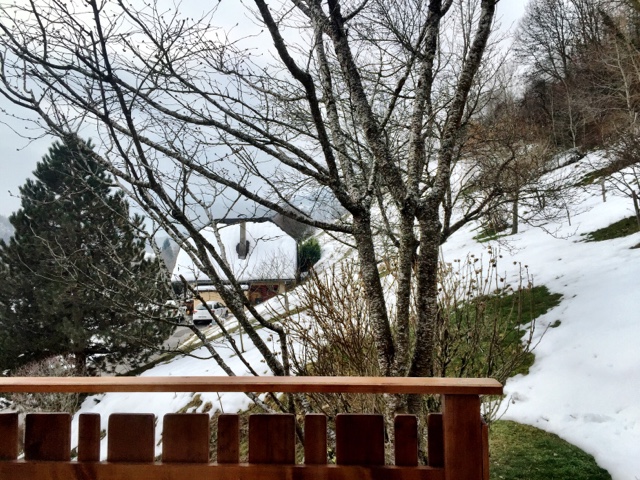 It was that surreal.

Every time I heard a rustle in the forest, I expected Olaf to pop out from behind a tree and start talking to me. 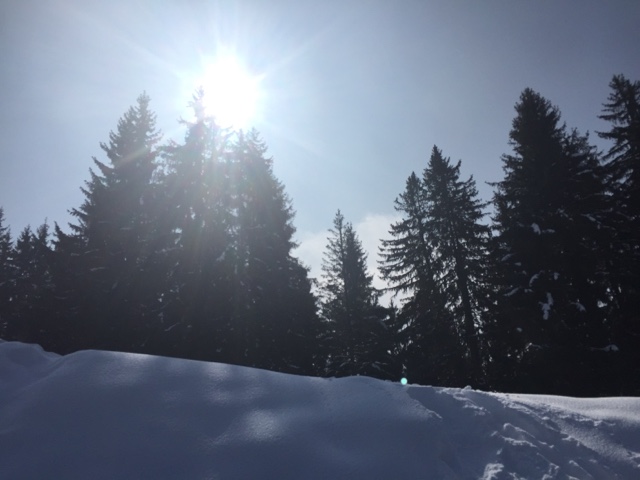 We started off with some sledging. Frenchie and I were the only adults in the 'luge' area. And before we start laughing, it was scarier than it sounds! Our adult masses combined with the nature of the plastic kid sized sleds we had borrowed off my student's grand kids meant that we gathered momentum much quicker when going downhill. Of course I nearly crashed into a kid, veering away at the last minute before I realised I could just stretch out my legs to stop myself. But it was SO MUCH FUN!!

We gave skiing a miss (I had already broken a collarbone ice-skating when I first arrived in Paris) and spent the rest of the afternoon walking on 'les raquettes' through the forest. The sun was shining and we were told that it was the best weekend of the entire 2015-2016 Winter season. Fresh snow and beautiful sun. It was the most magical feeling. You can take in so much more walking compared to cross-country skiing (not that I would know, I've never actually skied before but that's what I'm telling myself!). 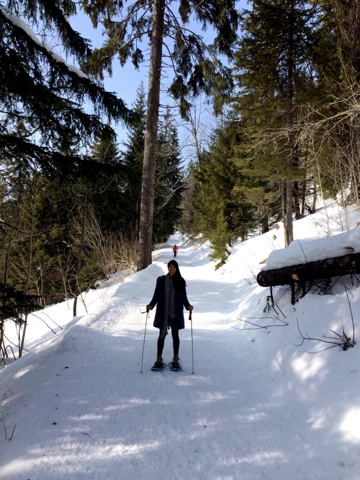 Then we decided to get off the path and make our own tracks. I finally understood how functional those 'raquettes' were, making sure we didn't sink into the soft snow! 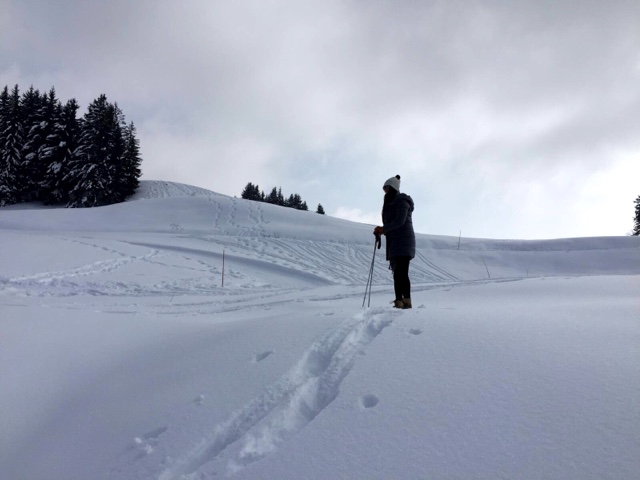 Frenchie made his own tracks as well, albeit downhill. And running. 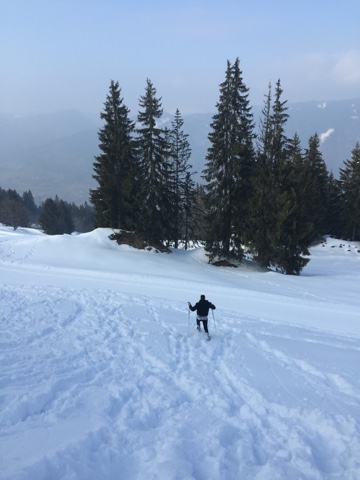 We saw some huskies (who looked a little wolf-like) waiting to go for a ride. 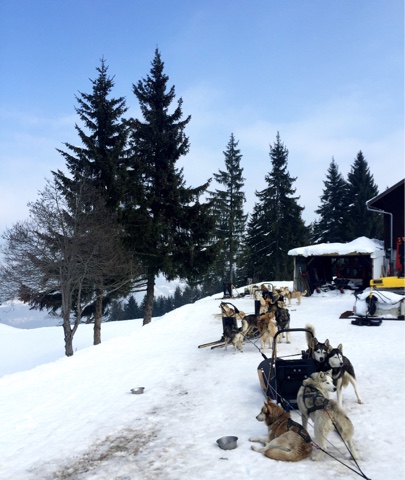 I wrote my name in the snow (and documented it on my phone to send to my Mum). 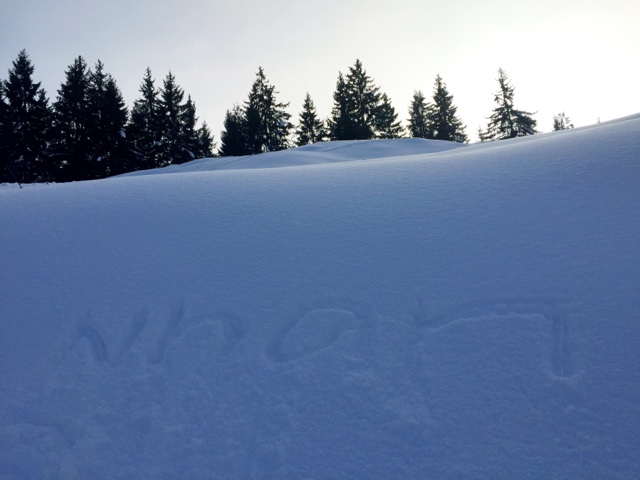 I asked Frenchie if he wanted to make one too and he passed. I couldn't understand. Who passes on making a snow angel...?! So weird. 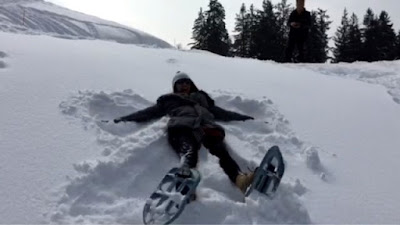 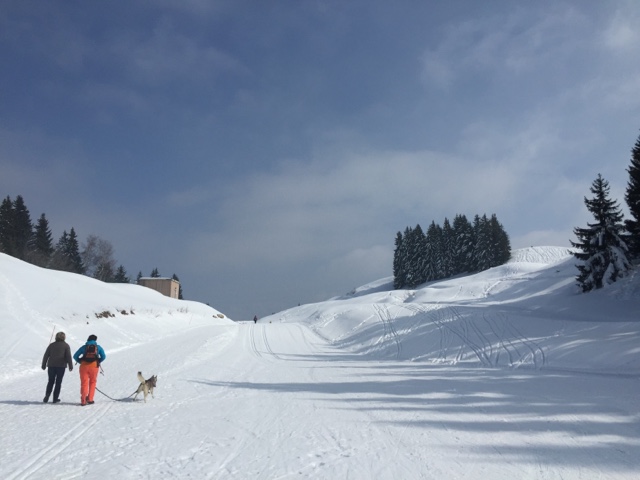 Towards the end of the afternoon, we had some crazy sunlight capture how delicate the individual snowflakes were. It looked like it had been snowing magic white glitter overnight. 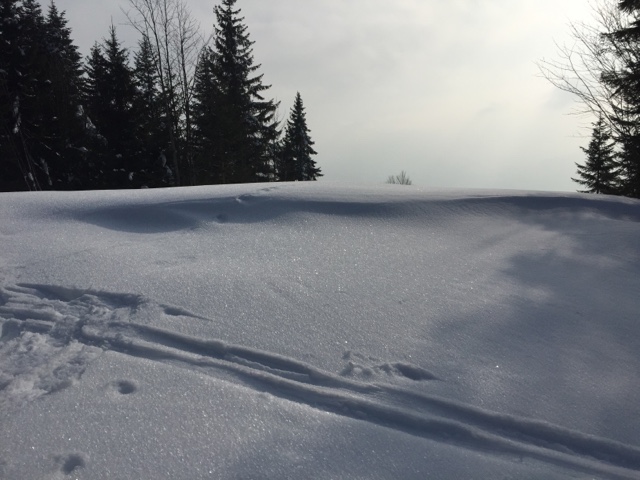 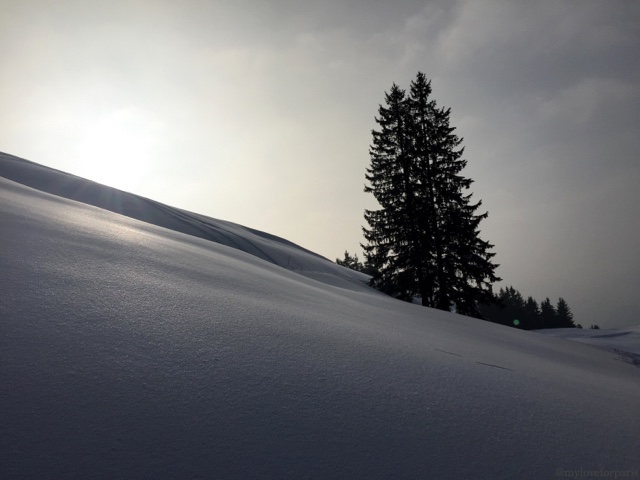 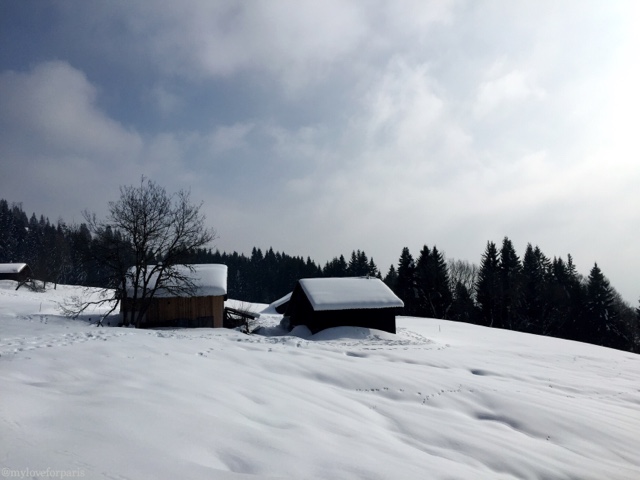 Then we finished up our day, said good bye to the snow, went home and everyone in the world lived happily ever after.

Email ThisBlogThis!Share to TwitterShare to FacebookShare to Pinterest
Labels: things to do, weekend trips