Ten things about being pregnant in Paris 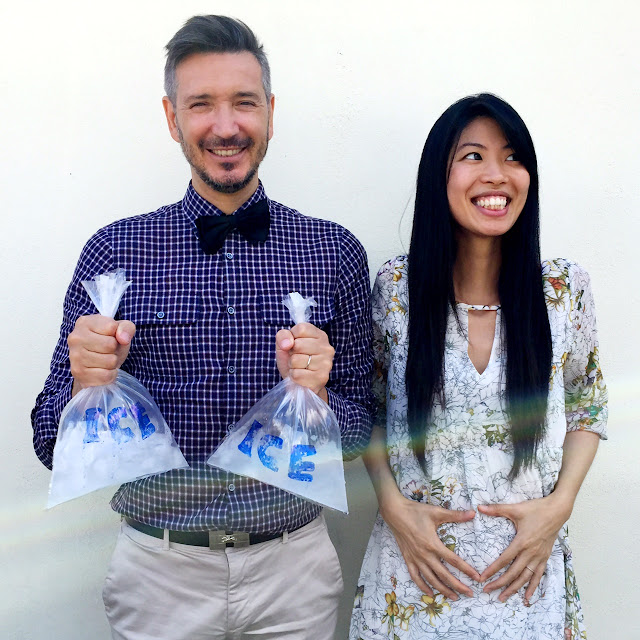 Following on from my getting married in Paris post, here's what I learnt 18 months later - ten things about being pregnant in Paris.


1. French babies bake for longer in the oven


The French calculate 41 weeks as full term compared to 40 weeks in other countries like Australia where I'm from. I'm not sure why there is this variation of one week between country to country because I assume human babies follow similar gestational periods across borders right..?
It can get confusing explaining this to your non-French friends and family but you learn to answer that question "when are you due" with a well practised response of: "1st of March according to Australia, 8th of March according to France, so we will see which country wins!"

French pregnancies tend to require more monitoring, tests and appointments when comparing your standard uncomplicated low risk pregnancies with other countries.
Unlike my girlfriend in Australia who was pregnant around the same time, I was required to have standard monthly check ups. You can opt for monthly gynaecologist appointments or the less expensive option which I opted for, free state subsidised monthly midwife "sage femme" appointments.
Also take note that internal examinations were sometimes a part of these monthly check ups in France to check on my cervix.
France is also one of the few countries that regularly tests for toxoplasmosis, a parasite carried by cats and rodents that can also be present in poorly cooked food.
I had never been exposed to this toxomawhatdoyoucallit in the past and was therefore not immune. Basically this meant that every month, I had to visit a lab to have a fasting blood test, as well as a urine test first thing in the morning. The blood tests weren't too bad, it was more the urine tests that were annoying. They obviously became harder and harder to collect as I gradually ballooned into a whale.

Which brings me to my next point - the French guidelines recommend that you aim to put on between 8-12kg during your pregnancy. We were reminded that we aren't "eating for two" (which is true..) and that it was important to eat a balanced diet (but basically not to go nuts). I still managed to put on 19kg by the time I got to the end, oops haha. Luckily I didn't end up with gestational diabetes.

I found these to be very informative in terms of content and delivery but understand that it can vary across the board. It was a great chance for me to brush up on my French pregnancy vocabulary. The general approach to pregnancy and birthing is more or less medical and somewhat clinical. There was no mention of birth plans, water births, home births, epidural-free pain relief etc but I was very impressed with everything else that was covered from making sure my position on breastfeeding was clear in the hospital to the pros and cons of natural tearing vs episotomies.
There was even a class dedicated to fathers exclusively which my husband went along to one Saturday morning. He was prepped on what to do when contractions came in, how to recognise when it was time to get to the hospital as well as when to anticipate the drop in hormones preceding the "baby blues".

When my pregnancy related sciatica pain set in at 8 weeks, I had physio sessions prescribed by my doctor covered by the government each week. My iron supplements and vitamin D supplements were also free, not to mention the DVT compression socks that were prescribed to me post-delivery. My dental check ups were free, and of course my whole delivery/hospital stay was free. The only thing we literally paid for was my husband's fold out bed hire when he stayed overnight in our PRIVATE ROOM, in a public hospital.
Vive la France..?

6. The epidural rate is relatively high and access to alternative pain relief can be limited

I read somewhere that 85% of French women end up opting for an epidural. At the beginning I wasn't keen on having an epidural, wanting my pregnancy to be as "natural" as possible (haha...).
Appointments with an anesthetist at the hospital are routine at around 2 months before the due date whereby you are briefed on the epidural process, as basically everyone assumes you will end up opting for one.


Fast forward to the D-day for me, 34 hours of contractions/hell later after being induced, I was dying for this epidural that I was so against.
Anyway, generally speaking as the epidural rate is so high, access to other pain relief options such as TENS machine, gas etc can be limited as well unless you are prepared beforehand (depending on the hospital). All I was offered at our particular hospital was a big exercise ball and running hot water.
In hindsight, I don't know why I was so against having an epidural in the first place. The last 6 hours of my labour was such a beautiful memory. I was still able to move my legs and was encouraged to keep them moving in different positions. I was given a little button to press in case I needed to increase the dose. We had music on, I was bopping along and sending whatsapp photos to my Mum with my legs up in the air ready to give birth!

Before being pregnant, I had this stereotype of the French not giving a hoot about recommendations regarding smoking and alcohol intake when growing a little human inside. Obviously this was a misconception on my behalf about general French society as there are guidelines, campaigns and posters educating the public about the risks associated with smoking and alcohol consumption while pregnant.

So I asked my GP (who was a mother of 3 in her early forties) what her take was on the types of food I should be avoiding while pregnant. Her response gave me an idea of the difference between French vs Anglo-Saxon attitudes. Whether or not I can extrapolate this experience to the entire French population is another thing.
She basically said to me "look, you'll find there are women who swear they ate sushi, ready prepared salads, unpasteurised cheeses, foie gras etc while pregnant without a problem - it's up to you how you want to go about it - I'd say try to eat as fresh and home cooked as possible, wash fruit and vegetables properly because toxoplasmosis is higher in France but above all use your common sense and weigh up the risks".
She also went on to compare freshly made mayonnaise from a fresh raw egg with a jar of ready made mayonnaise open for weeks and weeks in the fridge. Which was funny because in Australia at the time, there were strict guidelines about avoiding any eggs that weren't properly cooked while pregnant. I had friends who had not eaten runny eggs for 9 months.
I went on to decide for myself which foods were higher risk and which ones were a negligible risk. Reliably sourced, fresh in date egg from a supermarket that was still a bit runny when fried? Ok. Dodgy sushi that had been left out all day, yeah nah.

Like any big city with a dense population, taking public transport isn't the most pleasant of experiences. There are people who are mindful and helpful, those who are oblivious and those who just don't care and continue to stare into their phones.
Most of the time, people would notice that I was pregnant, offer their seat or ask those already sitting down to offer me their seat. I'm also a believer that I need to take responsibility for my own well being, which means that on public transport I need to make it obvious that I was pregnant and needed a seat. And each time I asked someone sitting down (especially if they were staring into their phones haha) to offer me their seat, they were more than willing to do so.
I also learnt to favour the bus over the metro as there is a designated area for the elderly, pregnant, disabled and kids (except that one time where I was on the bus and there was also a blind man with his cane, another man on crutches and myself..)

10. Being out while pregnant

I find France to be a relatively "old school" country, which is one of the things I appreciate about it as a society. There seems to be an "it takes a village" mindset and it isn't uncommon to be on the receiving advice from random strangers. If you have babies or children, it isn't uncommon for randoms to interact with them, make eye contact and talk to them. If you are a tourist, locals might warn you of pickpocketers when your bag is unzipped.
When I was pregnant and especially when it was obvious towards the end (thanks to the 19kg I had put on haha), I found the experience to be quite heartwarming.
I remember walking slowly along the street and a random woman stopping to ask me if I was okay and if I needed any help. At the supermarket, there was always a lane reserved for pregnant women and customers would actually tell me to go to the front of the line. At immigration, I was also able to get fast tracked through the line when coming back from our babymoon and I clearly remember being able to skip lines for tourist attractions, and having access to the lifts when heading up the Arc de Triomphe.
Preferential treatment towards pregnant women was very present around Paris which was a nice compensation from the daily grind.